“The budget is a tool of repression rather than innovation.”

Every business wants to be a competitive success. We want to build great teams, that can continually innovate to delight greater and greater numbers of loyal customers while reducing costs and increasing revenue. However, for most organisations, this is a dream, not a reality.

It’s not for want of trying though. Companies spend vast amounts of money, developing new strategies to encourage innovation, but only 6% of executives are satisfied with their innovation performance.

This failure is not one of strategy, but of execution. The management model used by most organisations today is not up to the job. It was initially designed to enable central planning and control, but this is now stifling many organisations ability to innovate.

Collaborative funding is a way to change that. Decentralising control of some money allows those closest to the problems to make decisions about they invest collectively. Think Kickstarter style crowdfunding, for internal projects.

The decentralisation of financial decision making provides an opportunity to create a competitive advantage based on releasing the energy and initiative of capable and committed people who have the ideas needed to innovate.

How to Start Collaborative Funding

There are many ways to do collaborative funding, but here I’ll talk mainly about the participatory proposal process. Keep in mind, organisational culture will affect how this works in your company, so take time to think about your current culture and how this practice will integrate with it. With that said, let’s look at how to start the process. 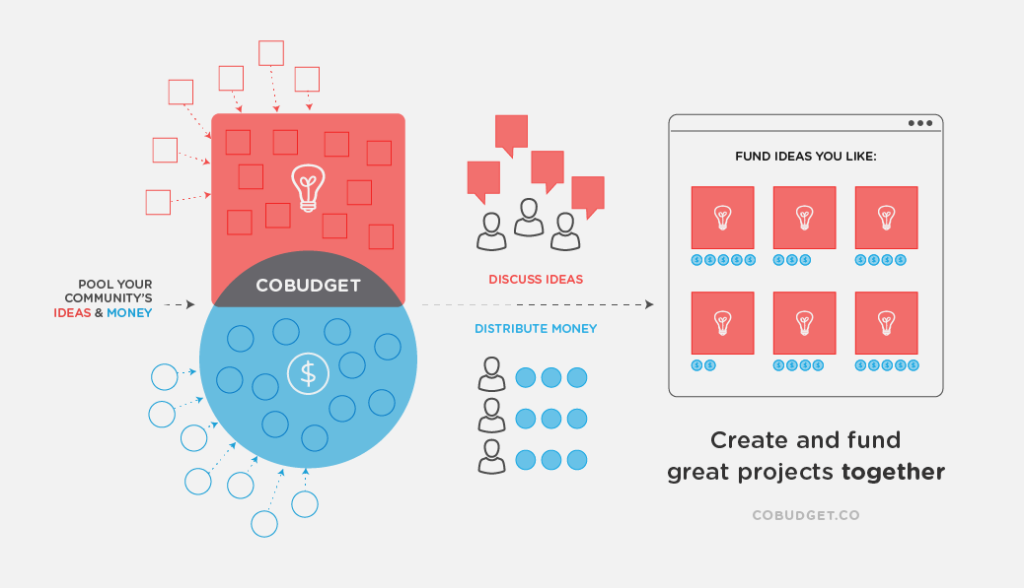 Considering your reason for adopting collaborative funding and how to facilitate the process is essential to avoid issues further down the road. I think there are four key areas to consider:

Scope: Consider what the goal of the funding will be and make this explicit. People will need to understand this to put forward reasonable proposals and allocate money in the best way. The scope will also inform who should contribute money, how much they should contribute and how often.

Process: Before you begin funding projects, you need a way to keep track of money, proposals and progress. Ensure everyone involved in the process understands how it will work and where they can see the funded projects. Transparency is key to success as it will take time to build trust in the process. I would recommend looking at tools like Cobudget to bring this transparency and make it easier to facilitate collaboration.

Onboarding: Do not underestimate the importance of a clear invitation to participate in the process. Money can be a sensitive issue for people, so make sure people feel safe and are not intimidated. Consider the behaviours you want to encourage and those you want to avoid and try to design an onboarding experience with those in mind. It’s also a good idea to document this onboarding process as you will need to onboard new team members in the future. There is an excellent example used by Perspectivity here.

Now you’re setup, and people are on board all you need are proposals to fund. The quality of proposals will play a large part in the success or failure of the collaborative funding initiative, so don’t leave the process of proposal generation to individuals.

The best way to get high-quality proposals is through people working together in multiple iterations to refine an idea. There are a variety of tactics and methods you can use to generate direction for proposals. It’s also helpful to have proposals follow a similar structure to make it easy for people to read and compare them. A good proposal should include:

Why: What problem does the proposal aim to address?
What: How will you solve the problem?
Who: Who has the problem, and who will solve it?
Budget: How much will it cost?
Timeline: When will you deliver outcomes?

Once proposals are submitted, ensure you communicate them well to funders. Creating engagement with the proposal is as much part of the work as creating it in the first place.

Once you have proposals successfully funded the hard work starts. Funders and the wider organisation must receive feedback as the work takes place to build trust and provide visibility of how people are spending the money. A few ways you can give this feedback are:

When reporting progress, ensure it is balanced and represents both the successes and the challenges, the more transparent you are, the stronger the culture around collaborative funding will be.

Collaborative funding is still a relatively new concept for many companies, but with the right governance, it can be beneficial, especially for funding innovation activities. Companies such as  Outlandish and Basecamp have enabled more significant innovation by reducing barriers to internal funding. I would be interested to hear from others who have done the same or have decided to adopt collaborative funding after reading this post.